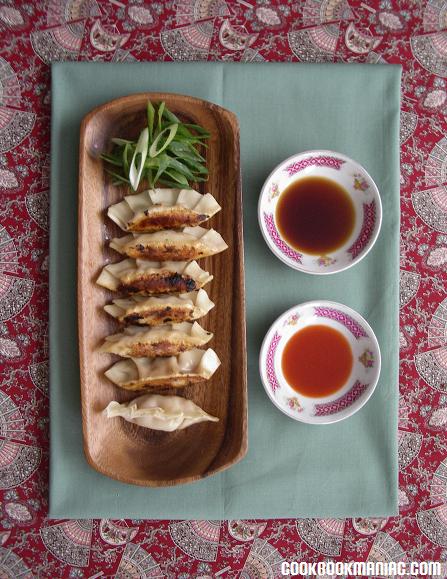 Gyōza is a japanese dumpling with origins from China. They were introduced to Japan after WWII when the Japanese soldiers returned to their homeland from China. It is now a staple in every Japanese home kitchen and is commonly eaten as a side dish to ramen.

Gyōza typically consist of a ground meat and/or vegetable filling wrapped into a thinly rolled piece of dough, which is then sealed by pressing the edges together or by crimping.

Gyōza should not be confused with wonton. Gyōza have a thicker, chewier skin and a flatter, crescent like shape, and are usually eaten with a soy-vinegar dipping sauce (and/or hot chili sauce); while wontons have thinner skin, are sphere-shaped, and are usually served in broth.

The most popular preparation method is the pan-fried style, in which the dumpling is first fried on one flat side, creating a crispy skin. Then, water is added and the pan sealed with a lid, until the upper part of the gyōza is steamed. 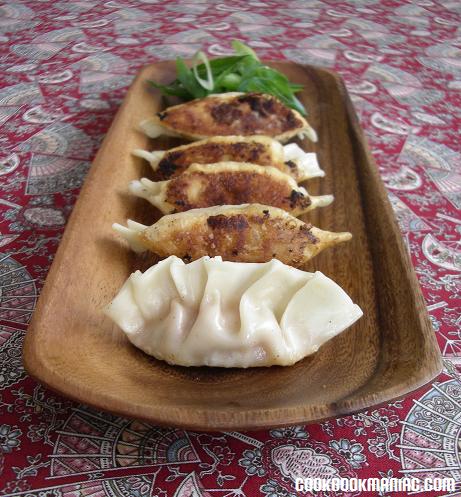 Method
1/ In a bowl mix the pork, cabbage, spring onions and garlic together. Then add the salt, pepper, soy sauce, mirin, sake and egg. Stir and fold the ingredients together. Once you have broken up the large chunks of pork so none are visible, briskly stir to blend the ingredients into a cohesive, thick mixture.
2/ For each dumpling, hold a wrapper in a slightly cupped hand. Scoop up about 2 teaspoons of the filling and position it slightly off-centre toward the upper half of the wrapper, pressing and shaping it into a flat mound and keeping about 1/2 to 3/4 inch of wrapper clear on all sides.
3/ Fold, pleat and press to enclose the filling and create a half-moon, pea-pod or pleated crescent shape. Place the finished dumpling on a plate that has been lightly dusted with cornflour.
4/ Use a medium non-stick frying pan. Heat the pan over medium-high heat with 1 tablespoon of canola oil and 1/2 teaspoon of sesame oil. Place the dumplings one at a time, sealed edges up in two straight rows. The dumplings may touch. (You maybe able to fit 10-12 dumplings). Fry the dumplings for 1 or 2 minutes, until they are golden or light brown at the bottom.
5/ Add 1/2 cup of simmering water to the pan. The water will immediately sputter and boil vigorously. Cover the pan with a lid, lower the heat to medium and let the water bubble away until it is almost gone, 8 to 10 minutes.
6/ While the dumplings cook, combine the soy sauce and rice vinegar in a small bowl to create a dipping sauce. Taste and make any flavour adjustments.
7/ When the bubbling noise in the frying pan turns into a gentle frying sound, remove the lid. Allow the dumplings to fry for another minute, or until the bottoms are brown and crisp.
8/ Take them off the heat and serve them bottoms up so that they remain crisp.
9/ Serve immediately with the dipping sauce, or chilli sauce. 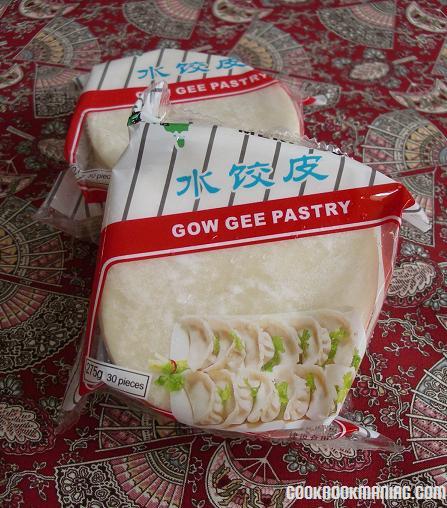 Tips from cookbookmaniac.com:
* The filling can be prepared 1 day ahead and refrigerated. Bring it to room temperature before assembling the dumplings.
* When adding the water to the hot frying pan, take the pan off the heat before pouring in the water and stand back. The water can sputter unmercifully.
* The dipping sauce adds to the tastiness of the gyōza, make lots!
* The original recipe includes 150g of peeled, finely diced prawns. I prefer these without prawns, and it also makes these babies less costly.

* I am all for cooking from scratch, but I am too lazy to make the pastry dough. For only $1.70 for 30 wrappers, you can buy the pastry and save yourself from the mess and cleaning up

Hello! If you’ve made the gyōza from this recipe, what did you think?